Comic books in the media Wiki
Register
Don't have an account?
Sign In
Advertisement
in: Comic Books in the Media, Comic Book Cartoons, DC Comics, Dial H for Hero

DC COMICS IN THE MEDIA

Ben 10 was created by "Man of Action" and was produced by Cartoon Network Studios. Man of Action is a group consisting of comic book creators Duncan Rouleau, Joe Casey, Joe Kelly, and Steven T. Seagle. The group worked on Ben 10 concept roughly 3 years before Cartoon Network picked up the series.

Early on in development, it was decided that a villain would be within the Omnitrix. After Ghostfreak was created the creators added dialogue into the first season to give the audience that there is something more to Ghostfreak.  Originally Cannonbolt the 11th alien transformation in the series, was going to be in the original set of aliens, but was replaced with Ghostfreak.

When doing test animations for the series the first alien transformation to be tested was Four Arms. It was the most popular transformation out of all the aliens for "Man of Action".

Many of the unused designs for Upchuck were recycled into in the episode "Ben 10,000" as two of Ben's aliens "Spitter" and "Articguana", and as villain Sploot.

Steven E. Gordon worked on a very early version of the show, his concept work reveals that Ben Tennyson was originally going to be a red headed young boy. Gordon also has early designs of the Omnitrix which look more like a watch than the final version, as well different designs and names for the alien transformations. Some of the beta names for the transformations were "StrongGuy", "Inferno", "RazorJaws", "Dragonfly", "Plantguy", and "Digger". Some of the early designs for the early aliens are more human and super hero like similar to Dial H For Hero.

When looking at the early work provided be Steven E. Gordon it became clear that "Man of Action" was going to be a "Dial H" clone.  The idea was to use Human-ish heroes.  Steven was given 10 possible character ideas to come up with new super-heroes.  Steven drawings were then turned over to Boyd Kirkland and Greg Johnson (from X-men: Evolution and other shows) who worked with Sam Register to go from human type heroes to Aliens, Alien bounty hunters and a father that was into UFO hunting and traveling around in a motorhome on their adventures.  While Boyd and Greg were involved they had Steven and Frank Paur to change the heroes to aliens using temporarily names of Digger, Dragonfly, Ghostfreak, Greymatter, Inferno, Plantguy, Razorclaws, Strong Guy, Upgrade, XLR8. 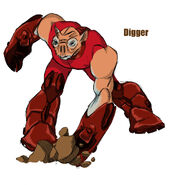 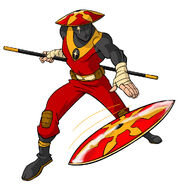 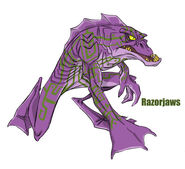 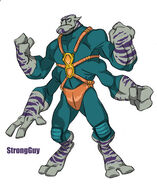 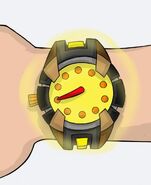 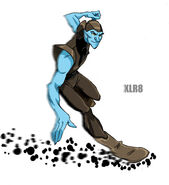